It's very unlikely that your neighbor will know magic, or collect custom decks too.

That's why we live our lives online. In a frantic search to find like-minded souls... to find our people.

The Discord Deck is a celebration of those common ideas coming together to form an alliance. A community. The tuck box is a premium matte finish and features curious iconography that only you will fully understand.

As well as gorgeous inside-tuck printing. I mean, c'mon... This would make insane wallpaper. The back design is unrestrained and free-spirited. A nod to the new wave magicians that are ditching the rabbits and top hats for a more modern take on magic. The deck itself features fully custom faces, including courts and aces. The pips themselves are battle-worn and show depth. Everything in this deck was hand-painted by Oban Jones and only dragged into digitization to be able to print it. Shhh! For magicians, the deck features one duplicate Queen of Hearts and a handy double-backer for effortless switches and concealments.

Get your Discord Deck today. #LongLiveTheDiscord


NOTE: If you're not already a member, you can join the
Ellusionist Discord Server here. Everyone is welcome.

Super cool design, love the feel of them and i absolutely love the tuck box!

E
Ethan
One of the best.

I bought this deck in a trio purchase with the Perpetua and the Classic Rounders. I have had my eye on these for sometime alongside the other two and decided the best decision would be to purchase all three at once. I definitely feel I made the right choice. This is my favorite of the three decks-- everything from box art to card art is absolutely fantastic. This is easily complimented by the quality I have come to expect from Ellusionist decks. They just feel so good to handle and I have received similar comments from others who have had the chance to inspect them as well.

They are pretty thin cards which i like a lot. They look interesting, not my favorite design though. Very good for magic and card games.

J
Joseph Medialdea
Great Feel, but not a fan of the design.

The E7 Luxury Press feels great as always. It's easily my favorite stock to practice cardistry with. There are plenty of other E7 decks you can find on Ellusionist. I'm a big fan of the cohorts personally, and I take a pack of those most places.

The card back of this deck is okay. I thught it was neat at first glimpse but the more I looked at it, the more I disliked it. This deck is a clear attempt to reach out towards the younger gaming/coding audience.

The design features many skulls wearing headphones, screaming into microphones, some chess game pieces, as well as various other items. All of the face cards feature royalty wearing gaming headsets. I like the style, but not a fan of the implementation.

A tagline of "Long Live The Discord" runs across the front of the box, and is also present on the Ace of Spades. Other lines on the aces include "Do You Even Script?", "Landscape not Portrait", and "Converse + Create"

I really think the mark was missed here. This design feels like what someone from the early 2000s would create if they were trying to get in touch with the computer oriented people of today. I think the only way it could have been worse is if it used l33t speak, which was a common and just as cringe way to type by replacing letters with numbers. This deck feels forced and belongs in r/fellowkids.

P
Patrick H.
Discord For All

This deck is perfect for everyone from magicians to cardists to just playing a game of poker. 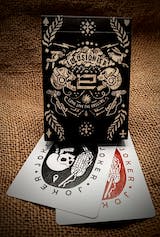 When i purchased my first Discord deck, to add to my every expanding collection I naturally added it to my display case, still sealed as I tend to do. However my curiosity soon got the better of me and a second deck was ordered and as soon as it arrived, opened. That led to a lost few hours as I enjoyed the feel of the luxury-pressed E7 cards and was fascinated by the iconography and images.
I especially love the four aces as they're all illustrated beautifully and add to the story of the deck. As a designer, this is something I'm keen to use on my own decks rather than simply the Ace of Spades. The colouring and details in the court cards are a delight, nobody who i've shown them to think they are anything but unusual, so subtle are the colours. As for the rest of the cards the clear simple pips and numbers make them ideal for close up work.
I was slightly disappointed that the intricate and gorgeous back design didn't include a marking system, unless my observation skills weren't up to the job.
It maybe simply that I look for marked decks all the time, who knows!
My cardistry skills are purely amateur but what little moves I can make are superb to achieve using these fabulous cards.
Even the tuck has a fabulous feel and finish, ever more important these days, and there is a feel of it being something special, different and unique. When I get the deck out people always ask to handle the box and then the deck. Their curiosity is endless, and it helps the build up to a routine to be able to see the automatic distraction that is present caused by the cards themselves.
In summation, the whole package is beautifully put together and definitely a bargain. I know, I should have bought a brick to begin with but space is such a premium for my collection that I have to show restraint. I'm sure most of you will understand.
Everyone should own at least one deck of these, preferably two. I've been using this as an EDC for a while and it's always a talking point. The crushed E7 cards are perfect for shuffling and handling and at this price, anyone starting out in close-up work or cardistry will enjoy any Ellusionist deck with this finish and handling qualities that are just sublime. In fact I now hunt out E7 decks (as well as Cartamundi B9s) and hope to create my own deck on this finish. Currently I use a UK maker, Ivory, and their sure-slip finish is a close third. I can't wait to see what Ellusionist come up with next, to feed my addiction!
Great value.

these are nice deck of cards, and handle very well.